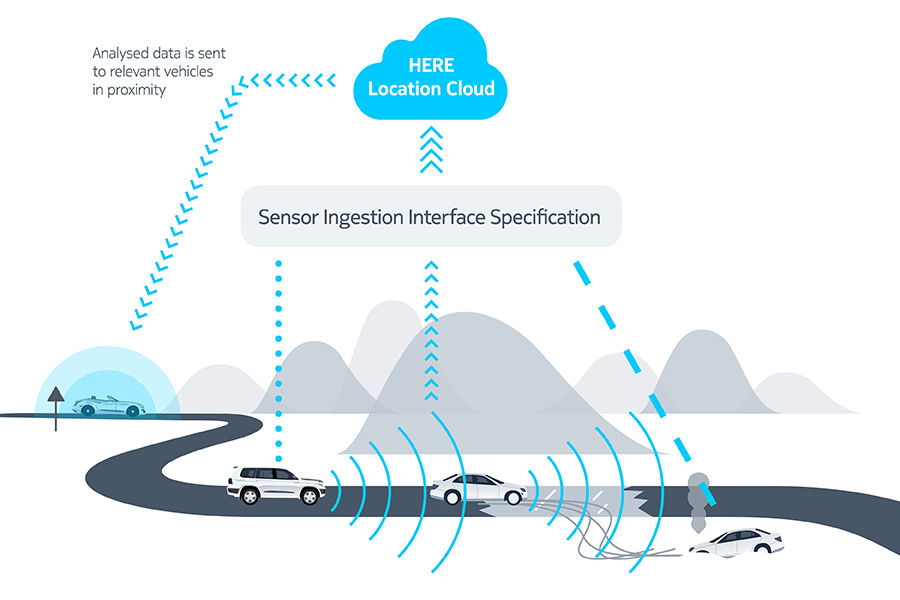 Digital mapping company Here says it is moving forward in its efforts to drive a global standard for vehicle-to-cloud data – a development which in turn brings the promise of automated vehicles closer to reality.

The car-to-cloud system, called SENSORIS, was announced twelve months ago as an open specification for vehicle sensor data to be collected and transmitted to the cloud by connected vehicles.

Sensoris defines how vehicles pass information about the road conditions they have encountered to servers in the cloud, which can then share useful information with other vehicles that report they are in the same area.

SENSORIS was initiated by HERE in June 2015 when the company published the first open specification for how vehicle sensor data gathered by connected cars could be sent to the cloud for processing and analysis. Currently, vehicle sensor data exists in multiple different formats across automakers.

HERE believes that pooling analogous vehicle data from millions of vehicles will be a key enabler for highly and fully automated driving, ensuring that each vehicle has a near real-time view of road conditions and hazards that can lead to better driving decisions.

The company is developing the required location cloud technology that can detect and process changes in the real world as they happen – including on roads in dozens of countries – on an industrial scale and at high quality.

HERE is putting this infrastructure in place ahead of anticipated new streams of vehicle sensor data it will be processing in its location platform in future.

According to HERE, it submitted the design for a universal data format called SENSORIS to ERTICO – ITS Europe, the European public/private partnership for intelligent transport systems, which has agreed to continue as an Innovation Platform to evolve it into a standardized interface specification for use broadly across the automotive industry.

“Our goal was always to find a home for this specification that is open, accessible to all and global. This is a vital step along the path to creating a shared information network for safer roads,” said Dietmar Rabel, head of autonomous driving product management at HERE.

“If a car around the next corner hits the brakes because there’s an obstruction, that information could be used to signal to the drivers behind to slow down ahead of time, resulting in smoother, more efficient journeys and a lower risk of accidents. But that can only work if all cars can speak and understand the same language,” he added.