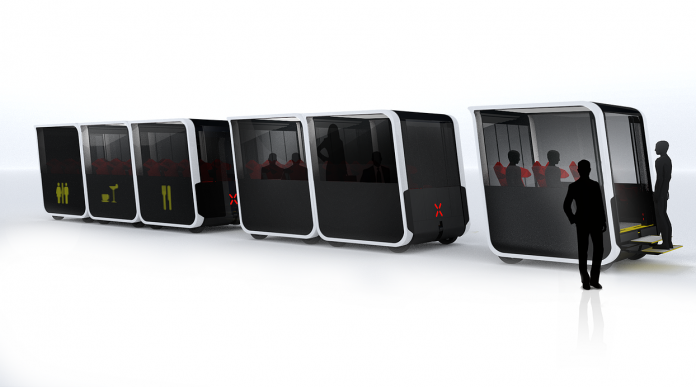 Two Italian researchers have developed a concept for a new mode of autonomous public transportation which may be released in 2020. The researchers, Tommaso Gecchelina and Emmanuele Spera are collaborating to develop Next, which are self-driving pods that can connect while in motion.

Driverless vehicles in general is not a new concept, and several major car manufacturers, such as Tesla, have already started testing limited self-driving capabilities in some of their vehicles. The concept of driverless vehicles aimed at mass transportation is a different thing altogether, and Next seems to have taken on the challenge to explore the possibilities in this area.

When the pods in their vehicles connect, passengers can walk through the connected vehicle the same way they would walk through different compartments of a train.

The pods are electric, have six seats, with space for four people who may wish to stand. A person who has downloaded their app will call a Next, adding details of pick-up point, number of passengers and destination. The self-driving pod will pick them up at the indicated location and connect them with other pods currently on the road to get passengers to their destinations faster. The video contains a more detailed demonstration of how the system works.

“The smart routing system of Next will autonomously drive the vehicles and join together modules, in order to redistribute passengers and optimize occupancy rate, cutting energy consumption and traffic footprint,” the website says about the system.

Think about this as Uber on steroids.